The ruby is certainly worthy of its ancient Sanskrit name, “Ratnaraj”; ‘King of Gems’. Rubies are very much in their own league. Ruby Gemstone is a precious stone that comes in pinkish-red to blood red gem variety of the mineral Corundum.

ARE YOU BORN ON JULY?

Ruby gemstone is your birthstone. Lucky and auspicious for you specially.

Ruby is defined as crystalline aluminium oxide, called corundum, with traces of the chemical element chromium, which is responsible for its red colour.

Ruby gemstone is one of the most popular and famed red gemstones. In addition to the bright red tint of the stone, Ruby is also priced for its hardness, durability, rarity and luster. Some of the transparent rubies of larger dimensions are rarer than even diamonds.

The color of Ruby ranges from blood red to deep reddish-brown. The blood red variant of this gemstone is the most preferred one that comes with a slightly bluish hue. This kind of rare Ruby is referred to as the “Burmese Ruby” or also as “Pigeon’s Blood Ruby” are extremely rare to find in the early days of trade, but now Mozambique Rubies are popular and significantly cheaper than their Burmese counterparts. The Ruby gemstones from Burma are known for their exceptional coloring and the finest Rubies have been derived from Burma.

The color of the particular gemstone is usually caused by the presence of inclusions of the metal chromium. The presence of impurities is responsible for imparting a florescent tinge to the gemstone that helps in the process of identification. They also tends to be “pleochroic” which sometimes tends to display a lighter and more intense color when viewed from different angles.

Rubies with absolutely no inclusions are nonexistent. The value of a ruby depends on how visible these inclusions are. Major inclusions and ones that reduce the transparency or brightness of the stone lower its value. Rubies typically include thin mineral inclusions called needles. These needles are called silk when present in intersecting groups. Ruby inclusions appear in the form of small crystals, patches of varied color or ones that resemble fingerprints.

Today’s majority of important ruby deposits are located on two continents; Asia and Africa. The center of the Ruby gemstone trade is in Bangkok, Thailand. The most valuable range of the rubies with the finest color & transparency come from Mogok, Burma (Myanmar). All new sources of the precious Ruby have also been discovered in Madagascar making Ruby Gemstone some of the precious mineral in the world.

Other important sources include that of Sri Lanka, Cambodia, Mozambique, Tanzania, India, Vietnam, Australia, and the United States (North Carolina). 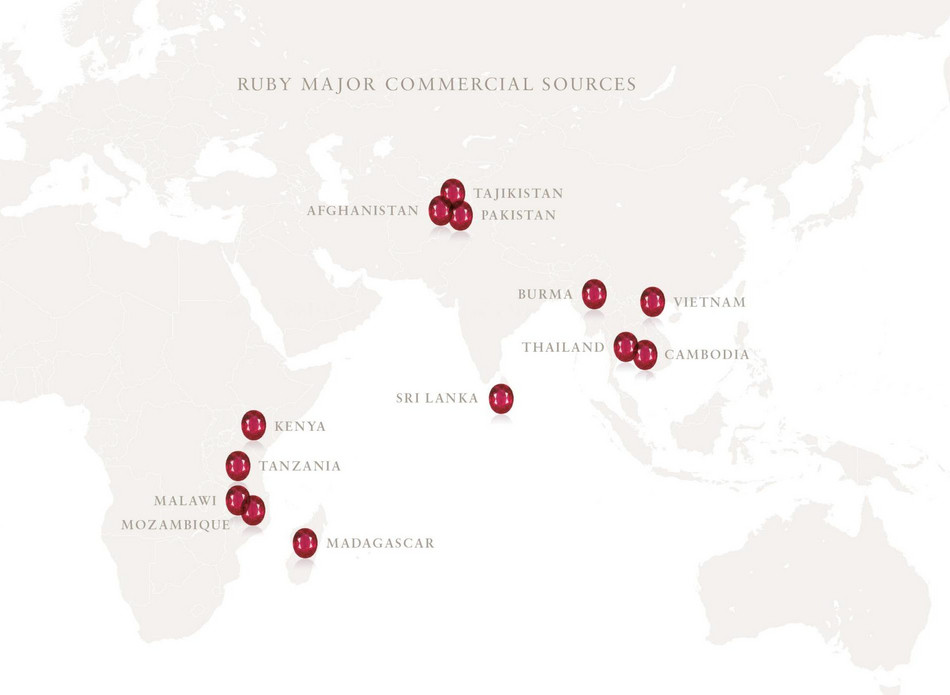 Ruby is often treated with heat for improving the color. A heat process is used to burn out the inclusions present in the ruby so that they look prettier. The untreated Ruby with the presence of excellent natural tint is exceptionally valuable.

A recent practice in the gemstone industry is to fracture-fill the rubies to conceal all flaws also known as Glass Filled Rubies. The fracture-filled rubies tend to highly cheaper than their original counterparts.

View all posts by admin →