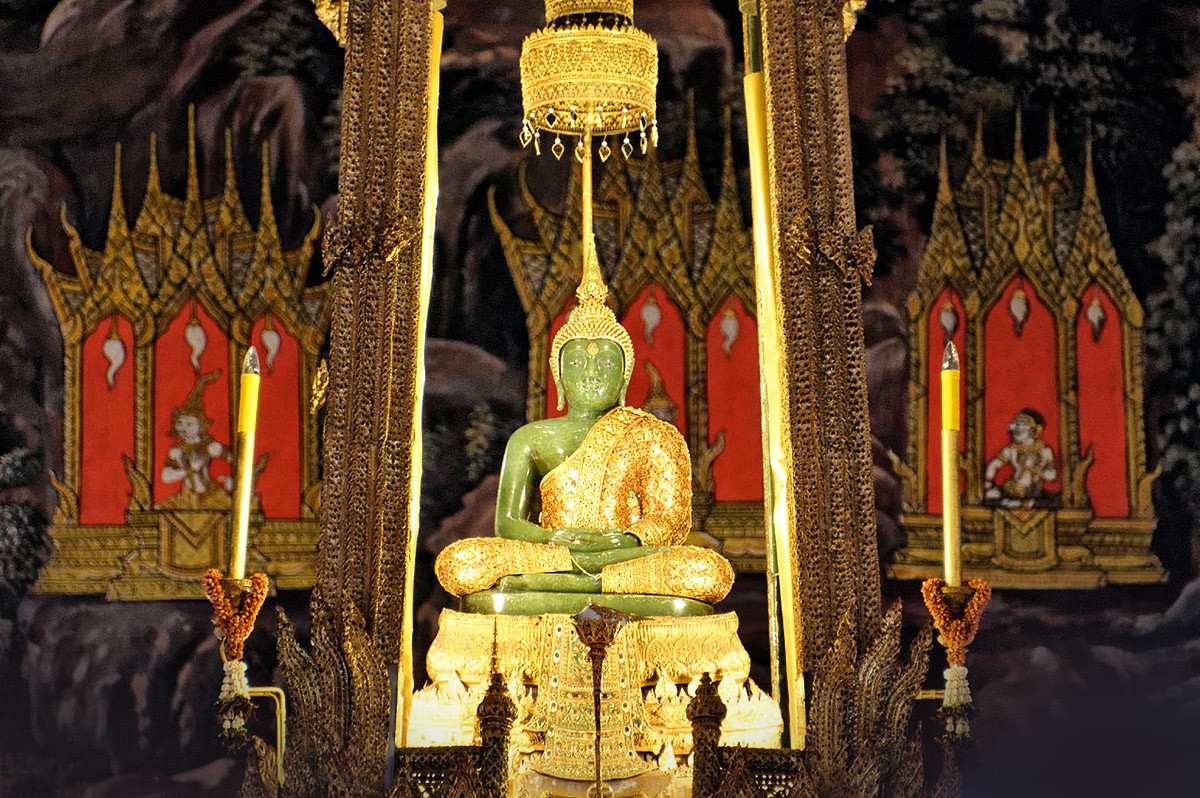 The world-famous Emerald Buddha is housed in The Temple of The Emerald Buddha (Wat Phra Keo) on the grounds of the Grand Palace in Bangkok, Thailand. This statue is an historic, extensively documented, and highly revered icon of Buddhism.

The Emerald Buddha is an image of the meditating Gautama Buddha seated in the lotus position, made of a semi-precious green stone (Jasper or Jade (Jadeite) rather than Emerald ), clothed in gold.

Numerous texts present a variety of historic and legendary explanations of the Emerald Buddha’s origins. One account describes the discovery of the Emerald Buddha in Chiang Rai, Thailand, in 1434 AD, after a lighting strike on the stucco wall of a chedi (a bell-shaped temple tower) exposed its hiding place.

According to legend, the Buddha was created in present day Patna, India, in 43 BC by Nagazena, a Brahmin-turned-Buddhist sage. The 45-centimetre-tall figurine made of a single piece of green jadeite (not emerald) depicts a sitting Buddha clothed in fine gold. The Emerald Buddha was venerated in India for some 300 years before being sent to Sri Lanka to protect that country from civil war.

The legend continues that in 457, King Anuruth of Burma sent a mission to Ceylon to request Buddhist scriptures and the Emerald Buddha in order to promote Buddhism in Burma. Though the request was granted, the ship lost its way on its return to India and landed instead in Cambodia. The Emerald Buddha enjoyed an opulent home in Angkor Wat before the Thais captured it in 1432. The Buddha reportedly made a stop in Laos, and Cambodian historians recorded its capture in their famous “Preah Ko Preah Keo” legend. The well-traveled Buddha was then carted off to Ayutthaya, Kamphaeng Phet, and Chiang Rai, all in present-day Thailand, where it was hidden by a city ruler. There the Buddha statue remained until an earthquake struck the city, cracking a stucco wall of a pagoda and revealing a glinting gleam of green jade. The Buddha was unearthed, mistaken for emerald, and given its misnomer of a name.

At this point in the legend, the Emerald Buddha takes on legendary status: King Sam Fang Kaen of Lannathai reportedly wanted the Buddha in his capital, Chiang Mai, but when an elephant carrying it refused, three times, to turn in the direction of Chiang Mai, it was taken as a divine sign and the elephant allowed to carry the Emerald Buddha where it pleased. The Buddha continued its southeast-Asian circuit, making stops in Lampang, Chiang Mai, the Lao capital of Luang Prabang, and Vientiane.

Since then, the Emerald Buddha has stayed in the main of the temple in Wat Phra Kaew, finally resting after its nearly two centuries of wandering. At the changing of the seasons, the King of Thailand changes the Emerald Buddha’s fine gold clothing, three gold outfits for the three seasons of Thailand.